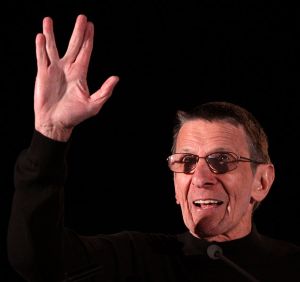 The news of the passing of Leonard Nimoy made me reflect on his impact on our culture and society. Regardless of his work as an actor, director, writer, poet, photographer, or musician, Nimoy will forever be linked to Spock. The breadth of his work and skills are the envy of most of us, and I do appreciate his legacy outside of Star Trek. Like most, I’ll always consider him as Spock. The loss of a quality person and actor will be felt by all and my thoughts are with his friends and family. Nimoy’s passing is an end of an era and hits all of us science fiction fans.

I grew up a child of the 1970s, and have always loved science fiction. Obviously, this includes Star Trek. Consider the time when the series came into production. The United States was in the midst of the Cold War, Vietnam was escalating, civil unrest was growing, and the Civil Rights Act was just signed into law in 1964. Here was a show that was bold enough to have a Russian officer (Chekhov), a black female officer (Uhura), and an alien as the first officer (Spock). Although not perfect in its makeup and not above some minor sexism, the crew of the Enterprise was diverse in terms of race. For the late 1960s, Star Trek was far and above most, if not all, other TV shows or movies. Woman and races were not disposable characters to kill off (these were the red shirts, but that’s another story), but rather members of the crew that contributed value.

In a sense, Nimoy and Spock are the same. The legacy forever will be tied in with the other. Nimoy defined Spock for the masses. He was more than pointy ears, or the cool logic that he applied to his thoughts and personality. Star Trek documentaries have addressed the impact of Star Trek on culture, and in many cases, the number of scientists that were inspired by Star Trek as children are extensive. The technology was exotic and inspirational. How many of our gadgets and technology today can be attributed to individuals being inspired by Spock? He was the alien on the show, but he was the science officer. Spock made science something interesting to many, and as they grew up, they became scientists. Science and engineering was in a sense one of the characters of the show.

The world today needs another Spock to inspire and promote science. Over the last decade or two, science has been reduced to politics and religious debates. Many people ignore data and facts because it does not fit in their belief system. I wonder about how many would-be scientists are looking elsewhere because there is nothing to inspire them. For many people, there’s nothing that makes them question the nature of things or to wonder. The 1960s had the moon missions, 2001: A Space Odyssey, and also Star Trek. Science was a forefront profession and sparked curiosity and wonder about the future. Today, it’s all been reduced to costs, politics, or whether or not it violates religious beliefs.

Leonard Nimoy will be missed, and although I never met or spoke with him, I feel bad at his loss. Social media is buzzing with those lamenting his loss, which attributes to his character and personality. Those who knew him are referring to him like a brother or father figure. His impact on others will be missed. His loss is felt.

Farewell Mr. Nimoy. You will be missed.

One thought on “Live Long and Prosper, Mr. Nimoy”