Christmas is a time of memories.  Time with family, good food, and full of children rushing towards the Christmas tree to rip open presents.  As we grow older, the memories of those who have left us grows.  The taste of Mom’s cookies, or perhaps the sound of a father’s laughter, which seem to fade over time.

There is no better time than a Christmas day to honor and create family memories, but also take some time to reflect on those who are serving and not able to help create these memories with their family.  The sacrifices these individuals make as part of their job can never be understated.

I love history, and often read many things related to World War 2.  One event always stands out for me.  Christmas day, 1944, Major George Preddy led a patrol of P-51 Mustangs in the skies over Belgium.  By this point in the war, Maj. Preddy was considered one of the top aces in the European Theater of Operations.  During the ensuing battle, he was hit by friendly anti-aircraft fire, and was lost.

Yet another loss of a young man during the course of the war. Maj. Preddy was only 25 years old at the time of his death.  For his family, the loss on Christmas day would forever leave a lasting pall over the Christmas holiday.  His brother, William, would also be lost to the war in April, 1945.  A family’s sacrifice was harsh and painful.

As we sit with our families this day, take a moment to be a broker for peace.  Sometimes families may be rife with conflict and some may not get along.  Take the time to bridge the gaps and create a lasting memory with those still among us.  Take some time to reflect on those who are gone, and are sacrificing their holiday for the greater good.  Merry Christmas and Happy Holidays. 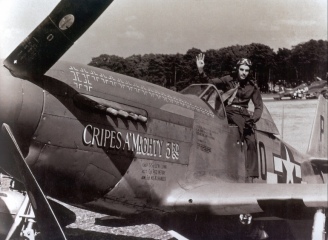 One thought on “Christmas Memories”