Try to grasp the cosmos. Try to imagine the infinite. For most of human history, the Earth was the center of the universe. All there was, or would be, centered on our planet. At times, I watch the news and see the same old stories, and it makes me think that so many think of themselves as the center of things. Things keep moving on, but yet, it seems like our society is caught in a rut. We cannot grasp the concept that we’re all in this together, and spend too much energy and time trying to convert others to our belief or way of thinking, instead of relishing the fact that our differences will make us stronger when we work together.

For thousands of years, thinkers and philosophers pondered important questions. What is love? What is the meaning of life? Why are we here? Does God or a creator exist? What awaits us after we pass from this world? These are worthy questions and everyone should spend time reflecting on them on occasion. We may all be different in our culture and religious beliefs, but our global diversity should lead to more understanding and peace, versus dictating our beliefs onto others, or trying to defeat some who are different.

I’m no scientist, but I do love astronomy. I believe there is nothing more humbling than the cosmos. The infinitude of stars in the sky is our galaxy is astounding. Add in all galaxies, and the number and the depth and size the cosmos is essentially incomprehensible. If we look at our place in the universe, it can be humbling, but also inspiring. When we look at ourselves in the context of the cosmos, we can see how small we are.

We live in a regular bar-spiral galaxy, nothing that unusual or different than many others. Our star is adrift in one of the arms of the Milky Way, not overly large or small, and certainly not in the center. Alien astronomers may gaze upon our little dot in their sky and keep on moving as it’s just an average middle age sun. It’s not large or pulsating. It’s not a binary star system. It’s not large enough to explode in a violent death in a supernova. Actually, the sun will transition to a red giant as it begins to die, transforming into a white dwarf that will cool down for billions of years. The light will fade in our solar system for the rest of eternity. A regular death of an average star.

The Hubble Space Telescope is one of the crowning achievements of our time. Launched just a bit over twenty five years ago, it has given us magnificence glimpses into our home in the galaxy. It has inspired and amazed with breathtaking photos of stars, nebula, and galaxies, yet, it also has humbled.

Over ten straight days in December, 1995, astronomers pointed the Hubble telescope to a seemingly blank piece of sky. Really, an unremarkable piece of sky, but they thought it may be interesting to see what the telescope would pick up. The images returned were astounding. Once thought to be an uninteresting small piece of sky, actually contained about 3,000 objects, most of which were galaxies. Not just regular galaxies like we usually see, but the photo was a glimpse back into time. The flecks of dust on the lens are very young galaxies, complete with millions, or even billions of stars. What was an insignificant piece of the sky was full of galaxies from when the universe was much younger. Astronomers had a glimpse into young universe, which was nothing short of remarkable.

As I gaze upon this awe inspiring and humbling photo, I think of two lessons can be learned. First, everyone is significant. Simply because someone is not a CEO or celebrity means they don’t matter. Everyone can be a universe full of life and depth. An unremarkable patch of sky revolutionized modern astronomy, and showed us all that everything is relevant. Many people think they may be unremarkable, or even insignificant. They are wrong. In the darkest of times, can be points of light that can spark and illuminate the way.

Secondly, although each of us is significant and remarkable, we are not the center of the universe. Looking at the Hubble Deep Field, we can see how much is out there. Can there even be a single point where everything revolves around? It’s certainly not the Earth, or even the Milky Way. As the news showcases many people who are full of themselves and organizations are funded to obscene levels that try to change the world to their own vision, we all need to realize that everything doesn’t revolve around us. Those who are different or have different beliefs should be embraced and celebrated, not made to conform to our way of thinking. Think of a world where everyone wears white t-shirts with khaki pants. Don’t you think it would be bland and boring? What about if everyone thought exactly the same? Would there be any innovation? Would all music sound the same, or would works of art all be similar? I think so, and the world would be worse off for it.

Live and let live. In the meantime, when things are difficult or if anyone thinks they don’t matter, just think of a small patch of nothingness in the sky that revealed so much. We are each a point of light in the universe, and we all matter. Just as long as we don’t start thinking we are the center of things. After all, the universe is spacious and borders on the infinite, and our little piece in the cosmos is but a speck of dust. 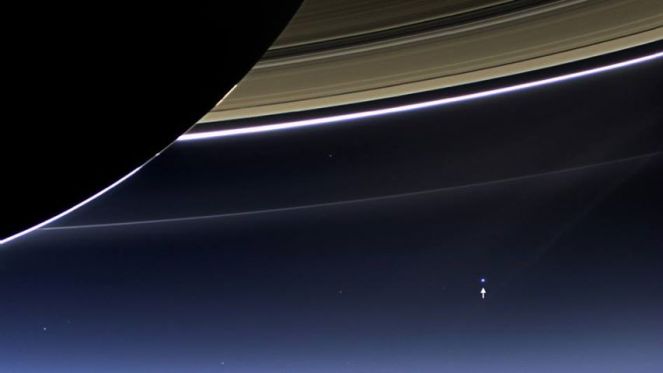