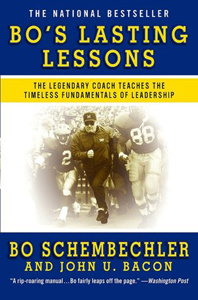 The University of Michigan football team will forever be associated with its former head coach, Bo Schembechler.  During his tenure as the head football coach, Michigan prospered and was routinely among the top ranked football programs in the nation.  In addition to being a top performing program, many of the former players went on to highly successful lives outside of football.  His former players routinely kept in touch or asked for advice throughout their various stages of lives.  All of which mourned the loss of this legendary coach when he passed on.

“Bo’s Lasting Lessons” is a very good read and I would highly recommend it for anyone looking to learn from a leadership master and coaching legend.  Although the book contains many football references and examples, the lasting lesson I retained from reading it was simply to have the members of a team take ownership of it.  This can be applied to a sports team just as easily as it can be to a sales team, or in my case, a team of IT analysts.  His philosophy was to bring new players in every year, instill them the history and pride of their school (i.e. singing the school fight song), and have them involved in multiple leadership capacities.  At the start of each season, he would meet with the senior players to determine the goals for that season.  He did not dictate his will through force, but instead allowed the players to determine the goals and how they would reach them.  Obviously he would run practices, level out any punishments for rule violations, and determine specific game-plans, but he allowed the players to have a stake in the team.  Instead of playing on a Michigan football team, these players were playing on their Michigan football team.

Far too often in the modern business world, there is rapid turnover as a result of a combination of companies moving operations overseas and workers moving around more often than in the past.  Either way, the end result is a higher degree of workers may not buy into the organization, and may have an attitude of serving their time, getting new skills, and moving on.  Some organizations are able to extend beyond this practice and create a sense of pride and loyalty.  It can be challenging and difficult to accomplish, but I feel that by reading this book, some of the lessons contained within it can be applied to create a heightened sense of ownership for a team of workers within an organization.  For me personally, I have made renewed efforts to not be simply dictating organizational goals, but how we can define our mission and path.  There are always things that are out of control, and there are elements to our job that we will never be able to change, as it is with the nature of all businesses.  However, there are things that we can control, and by empowering a team in this manner, every organization would benefit from it.  These workers would have more of a stake in the company, and the organization would be much better off for it.

I recommend this book for anyone wanting to have a team of individuals who take great pride and want to have a sense of ownership within an organization.  Although a football theme book, anyone should be able to learn from the lessons provided.