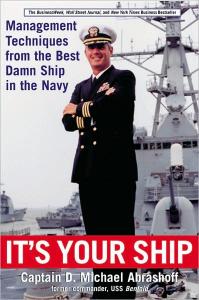 Over the last few years, I have read a few leadership and management books.  It seems that when I was simply an IT analyst, the larger picture of things did not seem to apply.  I did not really focus on the big picture and tended to keep a narrow focus on my tasks at hand.  Perhaps this was a mistake on my part, and when I was promoted to a department IT manager for the desktop support team in 2007, I suddenly realized that I should have done a better job preparing myself for this new role.  So as any newly promoted manger, or anyone who is undertaking a new role, they will begin to look for more information.  Many books have been written, and for the most part most are quite informative.  Although the points they may offer up are nothing new in the grand scheme of things, but sometimes it is nice to hear things stated differently, or points brought across via different stories.  For me personally, one I read not too long ago I found to be very well done.

“It’s Your Ship:  Management Techniques from the Best Damn Ship in the Navy”, by Captain Michael Abrashoff, is one of those books that stand apart from most others.  The basic premise is that Captain Abrashoff was able to take command of a U.S. Navy destroyer that was one of the worst performing ships in the fleet.  This particular ship was plagued with poor morale, and practically had a zero retention rate for the crew.  In fact, most of the crew wanted to be on a different ship by the point where Captain Abrashoff assumed command.  What transpired was a total reversal in the performance of the ship and the crew’s morale.  Within a year, this ship was not only improving, but was actually the top scoring ship in the fleet and had the highest retention rate.  What exactly happened to allow for such an improvement in such a short amount of time?

This book offers many easy to adopt techniques that can be incorporated into any business.  In my mind, all people in management or leadership positions should read this book.  While some of the tips may not apply to all situations or individuals, many of them can be used in some capacity.  An example that stands out for me personally is how Captain Abrashoff empowered the crew to make decisions.  Insecure leaders or managers may resort to micro-managing, and force all decisions to go through them, essentially displaying a general lack of trust in those they manage.  Captain Abrashoff went out of his way to trust the decisions made not only by lower ranking officers, but most importantly, the enlisted members of the crew.  This worked wonders for crew morale.  From their perspective, they were being trusted, and took ownership of the well-being of the ship.  This was not only a U.S. Navy ship, but “their” ship.  I always tell the analysts on our staff, as long as it does not violate any major policy or law, and will not cause embarrassment if it were reported on the news, I will back their decisions.  I may make a different decision in the same situation, but it is more important to back up their decision.  If it is a mistake, they will learn and grow from it.  Managers who simply dictate all tasks without any flexibility create problems because there is no room to maneuver or improve on it, and will only create an environment of simply following orders.  These individuals will no longer try to recommend any improvements or new ideas, and probably not care whether or not a project is successful.  Morale, innovation, and long term sustainability will suffer.  Perhaps the main point stressed in this book is to allow those under you to make decisions, and then to support them.  This ship turned into a ship with an enabled crew, which was the underlying force to propel it to a model ship of the fleet.  An empowered staff at any business will only cause the business to be stronger and probably more successful.

Another example that stuck with me from this book was to create a workplace that is engaging and fun.  Try to make the office or work place a positive environment, and staff will want to come into work.  For the most part, everybody wants to learn and grow.  By encouraging the crew to grow professionally and personally, they began to take pride in the ship.  For business, customer service would improve, efficiency would improve, and each staff member will take ownership of the business or organization.  People should be allowed to grow and succeed, but it is vital to allow for an atmosphere that it is equitable, so that all members of the staff can grow and improve both personally and professionally.  Situations where people improve at the expense of others will only create a largely negative atmosphere.  Captain Abrashoff was able to be a positive force in the growth of the crew, which allowed many to achieve success not only on the ship, but in their life afterwards.  For a business, it is expensive to deal with a high turnover rate.  In the military this is evident with short four year commitments, but Captain Abrashoff was able to circumvent this inherent problem by cultivating a high retention rate.  Without the need to constantly retain new employees, time and money can be put to better uses.  My personal philosophy is to allow for all members of our staff to grow in such a manner that they rise to levels they wish.  Sometimes that may take them to other places, but if they leave our employment, as long as it is a step up the ladder, I feel I have done my job.  For anyone to leave to an equal or lesser position, I would question my efforts and decisions that may have led to their decision.

In my own way to foster this at my place of work, I allow for greater schedule flexibility, have mandated that time should be spent on personal R & D projects (just not when more pressing matters or projects are being worked on), have a lot of training possibilities, give lower ranking members of the staff more advanced problems or projects to work on, and most importantly we have an X-box 360 for some gaming when things may be slow or during lunches.  The sound of laughter and camaraderie I hear when the X-box is being used creates a feeling of teamwork that any number of meetings or staff retreats can accomplish.

One final thought pertains to a story from the book when Captain Abrashoff first took command.  The ship would have lunches on the deck from time to time.  At his first lunch as captain, he got in the food line at the back as all others, but quickly noticed that the officers would jump in front, as rank has privileges.  Some of the officers noticed and spoke with the captain about it.  His response was that he would wait in line like all others and should not receive preferential treatment.  He also sat and conversed with the crew while eating, thus was able to get to know them as individuals and learn from their own experiences.  The other officers sat in their prime areas on the deck away from the crew, however they were observed looking towards the captain not knowing what they should do.  At the next lunch on the deck event, the officers went through the food line, waiting their turns like everyone else, and sat and ate with the rest of the crew.  This is a great example of a good leader setting an example for others to follow without having the need to say “look at me” or “do what I am doing”.  If done right, others will model their ethics and habits after an effective leader such as this.  For me personally, leadership and examples should be set at the top and work down through the organization.  I think it is a mistake for managers or create separation from everyone, as they will be disconnected from those on their staff.  I feel it is more important for upper managers and executives to reduce the number of non-essential meetings and get out of the office more.  Walk around and greet everyone they come across.  Get to know people on all levels, and greet them by their name when they encounter them.  Give up dedicated parking spaces (unless they need a handicap space) or luxurious offices and be closer to the staff.

Overall, I found this book to be extremely informative.  I have made several attempts to make our work place more engaging and fun, without losing our professionalism and productivity.  I have full trust in our staff and I am confident all individuals are happy being able to grow in a professional and personal capacity.  As a result, morale is as high as it has ever been, and co-workers are engaging with each other at heightened levels not previously seen.  Not all good ideas come from the top, and in many cases, the mismanagement of many organizations have led to instances of bankruptcy or in some cases complete closure.  Any business student, or anyone interested in modern business practices, can find many examples of companies that have floundered or simply vanished through mismanagement.  The fear of making decisions or expressing new ideas reduced innovation to the point where companies that at one point were industry leaders stuck to products of practices that fell by the wayside and they were forced into oblivion.  Read this book and take from it what you can.  It may not pertain to all situations, but most examples can easily be converted to any business or situation, and will most likely lead to a more engaged and innovative workforce.